We engage children’s natural curiosity about the world; we encourage them to formulate questions and then to actively seek answers to those questions, using whatever tools are at their disposal.

With the increased focus on inquiry-based learning in the BC curriculum, Science World supports teachers to integrate inquiry learning into their classrooms.

Inquiry-based learning requires guidance from the teacher to support students’ progression along the inquiry continuum.

This Helicopter activity can be adapted for any level of inquiry. Primary students who have less experience benefit from starting at the confirmation or structured levels of inquiry. It is important, at all levels of inquiry, that teachers help guide students through their thought processes (meta-cognition) based on their observations.

Hypothesis: a proposed explanation made as a starting point for further investigation.

Prediction: a statement about what might happen in the future.

Example of the Inquiry Process 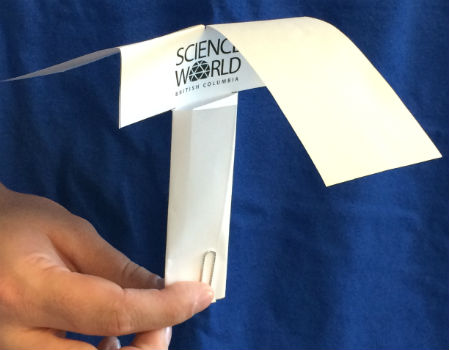 Ask Questions for a structured or guided inquiry:

Teacher tip: For grades K-1, you may wish to divide the class into groups, but have the entire class work on one of the suggested questions.

Guide students as they choose an independent variable (the element that we change).  These could include length of wings, stiffness of paper, number of paperclips, etc. Collect suggestions from students and choose (as a group) which one(s) to test.

Select a dependent variable and establish how to measure it.  The modified helicopters could be measured in different ways.  For primary students, compare the original helicopter (which serves as the control) to the modified helicopter by dropping both at the same time. Older students could time their helicopters, or count the number of spins by attaching flagging tape to the paperclip at the helicopter’s base. To count the spins, students would count how many times the flagging tape has wound around the helicopter.

If students are more experienced with inquiry, they may pose their own questions to explore.  Help students form their own question for investigation (ones that can be answered with an experiment) with starters such as:  “What might happen if…” or include the phrase “does the____ make a difference?” or “How does ____ affect ____ ?”

Why do Hoopsters Fly? (On The Road pre-visit activity)

Why Inquiry? Science World is a charitable organization that engages British Columbians in science and inspires future science and technology…

In this activity, students make their own paper plane Hoopsters, with adult help, then have fun making them fly! The…

In this make and take, students exploit the force of drag to make a parachute that will drop as slowly…